Zygopetalum John Banks a cool growing orchid for the intermediate house. Well known for its heady perfume that develops best with a rise in daytime temperatures. An easy undemanding plant also suitable for growing as a houseplant.

Why is WCO home here?

John F Banks was born in the Royal County of Berkshire, on 24th June 1913, the son of a blacksmith, he found there was little employment opportunity in his small village and so moved over the chalk downs to Wyld Court at Hampstead Norreys to work with Orchids. The owner of Wyld Court, Sir William Cooke, ran a horse racing stud farm and had an extensive orchid collection housed under heated glass. Young John was take on as grower and for over 40 years dedicated his life to Orchids at Wyld Court. First working for Sir William, then later for his daughter Betty Garton - who became also well known for her orchid collection at Quinta Da Boa Vista Orchids, Funchal on the island of Madeira. For many years John ran Wyld Court Orchids and regularly used to supply plants to the nursery in Madeira to help build up the stocks. The two nurseries complimented each other perfectly.

A lifetime of dedication, took the private collection of Wyld Court Orchids into the era of commercialism and it was always known worldwide as one of the great UK orchid nursery collections. Going to Wyld Court orchids was said by many to be like exploring a 'jungle of orchid gems' and this was in part due to the great orchid growing skills of John. John controlled all aspects of running Wyld Court Orchids and as grower created many generations of orchid hybrids during his lifetime. Having a great love for these plants he was always ready to pass on his knowledge and ideas to the many customers and visitors who used to come through the doors from enthusiastic amateur to dedicated collector. Work at Wyld Court allowed John to make and meet friends from all around the world as orchid growers are a truly international fraternity.

In 1975 in recognition to of the lifetime of work and help, Betty Garton decided to honor John in the naming of an orchid hybrid with the Royal Horticultural Society Orchid Register. At the time it was the custom, among many of the great orchid nurseries, to name Zygopetalum hybrids after outstanding orchid growers and hybridizers. To carry on this tradition Zygopetalum John Banks (Z.Blackii x Z.crinitum) was registered. John had made the original cross, and watched and cared for the developing seedling for some 5-7 years as they matured to flowering size at the nursery. What made this cross special was the use of outstanding parents and this resulted in a large number of seedlings with superior deep blue coloration and fragrance. A number of seedling went on to gain recognition by being granted the prestigious Award of Merit (AM) from the RHS. Talking to John about such an honor he would modestly say 'Zygopetalum John Banks will live on long after Wyld Court and I am forgotten'! Indeed this Zygopetalum has proved to have an outstanding legacy. To date, March 2002 the RHS register hold 12 hybrid Zygopetalums where John Banks is one of the parents. He would be very pleased to know how much pleasure such plants give to orchid growers around the world. He retired from Wyld Court in 1978 and carried on his love for plants in caring for his garden.

John had a keen interest in charity work and used to open Wyld Court Orchids each year in the flowering season for local and national charities. Below you can see one of the photos from the local paper as publicity for one of the Open Sundays. 26.04.1976 John lived most of his life in the village of Hampstead Norreys, at Barnes Cottage. Historically an interesting thatched house, built in 1660, it had been constructed from oak timbers that showed signs of their former marine use in ship building by traces of sea salt. As the village is many miles from the sea it is speculated that the original builder had the ship's timbers floated up the Thames river before being taken overland to the village. John cultivated the garden in a typical 'English cottage garden style' spending many long hours caring and growing plants. When asked why he used to spend so much time and effort in the garden? He used to wryly say..'well you know the house was build by an alleged miser in 1660 and no one ever knew where his gold was hidden'! There were some mighty old Oak trees in the garden easily as old as Barnes Cottage. A lifetime of dedication to Orchids and plants left little time for much else and John never married. He was always keen to pass on knowledge and stop and help when someone wanted to know how to grow their plants better. Over 40 years of experience growing award winning orchids meant John was one of the great orchid characters and had a truly remarkable wealth of orchid knowledge and experience to share with fellow growers.

For those that knew him, and I count myself fortunate, he brought a great deal of happiness and knowledge to growing better orchids and for that surely made the world a better place. I worked with John back in the 1970's up to his retirement in 1978. Sadly he passed away about 4 years ago.

To view some of the orchids John spent a lifetime looking after follow the link to the page of orchid photos. 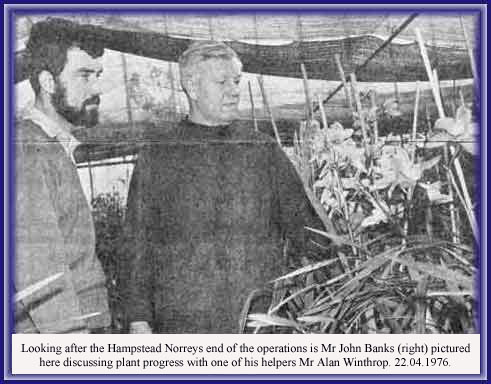